The Mauritius Post released on June 29, 2015 a new Rs17 stamp on the theme 'Disaster Risk Reduction'. 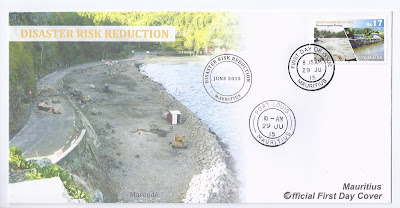 Mauritius, isolated in the Indian Ocean, enjoys a tropical climate and has been exposed throughout its history to frequent natural disasters like cyclones making it very vulnerable.  This vulnerability has been exacerbated by the climate change phenomenon which has brought new extreme climatic conditions such as sea level rise, droughts and flash floods.

On March 30, 2013, Port Louis, the capital city of Mauritius, was struck by flash floods which claimed eleven lives, caused serious damages to infrastructure and the environment and hugely affected the economy.

Subsequently, the authorities upgraded the National Disaster Operations and Coordination Centre into the National Disaster Risk Reduction and Management Centre to act as the focal response institution in case of disasters.  The Centre now operates under the aegis of the Ministry of Environment, Sustainable Development, Disaster and Beach Management, and is also responsible for the management of risk reduction activities in a coordinated approach, as well as the development of long term strategies to mitigate disaster risks.

The stamp portrays, on the left, a picture taken during the floodings at Canal Dayot, a suburb of Port Louis, and on the right, one taken after the depth of the Canal was substantially increased and the banks consolidated with massive rocks. 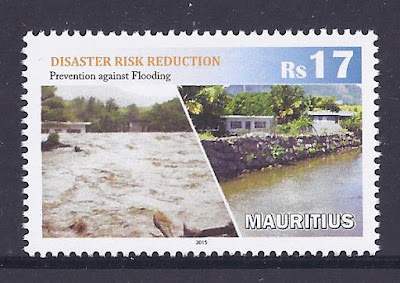 The FDC illustrates the coastal road of Macondé in the south-west of the island.  Macondé is infamous for its former low level bridge which used to become impracticable and unsafe during high tides and cyclones and for its rock-falling cliffs.  A brand new, safer bridge was erected a few years ago, and, following the falling of huge rocks in April 2014 (the rocks can be seen on the left of the FDC), the authorities decided to extend the coastal road outwards into the sea and further away from the cliffs.  The new road opened on July 15, 2014. During the construction works, boat shuttles provided free transport services to the inhabitants.