The Mauritius Post released on 9 October 2014 a Special Commemorative Cover (SCC) to mark the 140th Anniversary of the Universal Postal Union (UPU). 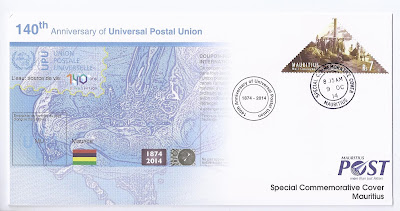 Established in 1874, the UPU, with its headquarters in the Swiss capital, Berne, is the second oldest international organisation worldwide created shortly after the International Telecommunications Union.

The UPU is an inter-governmental organisation which is the primary forum for cooperation among all postal operators. It helps to ensure a truly universal network to promote postal products and services and host numerous user groups to develop other sectors related to the postal sector.

Structure of the UPU

The UPU consists of four bodies:
- The Congress
- The Council of Administration (CA)
- The Postal Operations Council (POC)
- The International Bureau (IB)

Over the years, the UPU has strived to keep pace with a changing world , harnessing new information and communication technologies to further the development of efficient and accessible universal postal services facilitating communication worldwide. As borders disappear, migratory movements swell, and global trade flourishes, physical, financial and electronic postal services are the three main pillars of postal development which UPU recommends. These three pillars are important for a country's social and economic fabric as they foster people's inclusion in all facets of society, and fuel trade and economic growth at all levels.

2014 is a milestone year for the Universal Postal Union, as it celebrates its 140th anniversary. To mark this event, the International Bureau issued a special anniversary International Reply Coupon (IRC) which is reproduced on the above SCC.

The IRC was put on sale in Mauritius at Rs72 each as from 9 October 2014, concurrently with the Doha IRC, issued in 2013.  Akin to postage stamps, the International Reply Coupon has by tradition been a collector's item since its creation and is classified by the International Federation of Philately (FIP) as 'postal stationery'.

The UPU is a specialised United Nations agency and is actively engaged with numerous international organisations for the benefit of communication activities around the world.  The UPU is also very much concerned with Sustainable Development activities to reduce CO2 emission.

The Rs7 stamp featured on the SCC was chosen as it relates to the early years of the introduction of railway in Mauritius which contributed tremendously to the development of the postal sector, as testified by many Post Offices (Black River, Rose Hill, Poudre D'Or, Mapou, etc) being still located on the sites of old train stations.

On this occasion of World Post Day 2014, Mauritius also celebrated the 45th anniversary of its adhesion as a full-fledged member of the UPU following independence.

N.B.: The above text is adapted from the SCC insert.