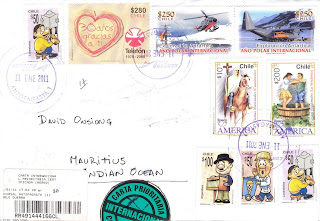 Thank you Pablo for this awesome registered cover sent from Antofagasta on January 11 last.  The two $250 se-tenant stamps portraying the Antarctic Exploration were issued on January 29, 2008 to mark the third International Polar Year (2007-2008).  They form part of a sheet of 6 different stamps and only 30,000 such sheets were printed.
The $280 stamp was issued on November 25, 2008 to celebrate the 30 years of Teletón.  The major Chilean television networks hold an annual telethon called Teletón to raise funds to help children with developmental disabilities.  The telethon is an event of national unity and is proportionately the most widely watched telethon in the world.
The 4 "small-size" stamps ($50 & $100) picture Chilean Traditional Characters.  From right to left:
- Lustrabotas, or shoe-cleaners
- Heladero, or ice-cream man
- Organillero, or organ grinder
Roberto Sepulveda brillantly designed the Cuasimodo and La Vendimia (The Vintage) festivals on the $10 and $200 stamps.  On the Sunday after Easter, parish priests in colonial times went forth to take the Holy Sacraments to the elderly and infirm who could not get to church on Easter Sunday.  They were guarded by cowboys who protected them from bandits; they were also given food and drink to wash away the road dust.  Cuasimodo has nothing to do with the Quasimodo of fiction, nor is it the name of a saint or a holy person, but it is attributed to the latin used in Catholic ceremonies.

The Vintage Festival is a traditional festival including the benediction of the grape juice as well as the traditional stomping of grapes, wine and degustation of food and numerous artistic presentations.

Again, thank you  very much Pablo for your cover, my first one from your country which is my 25th country/territory...   (;
Posted by David at 5:12 PM

Email ThisBlogThis!Share to TwitterShare to FacebookShare to Pinterest
Labels: Chile