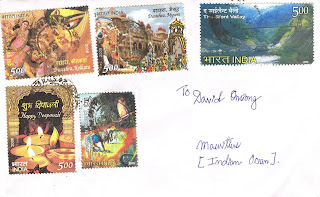 Thank you Shinjini for this nice cover franked with 3 stamps featuring 3 diiferent religious festivls in India:
- Durga Puja (দুর্গা পূজা), which celebrates worship for the Hindu goddess Durga
- Dashera, which is the state-festival of the state of Karnataka.
- Divali, also known as Diwali or Deepavali, is the festival of lights.

The last two stamps depict The Silent Valley in the state of Kerala, South India and the International Year of Biodiversity which took place worldwide in 2010.
Posted by David at 3:48 PM

Email ThisBlogThis!Share to TwitterShare to FacebookShare to Pinterest
Labels: India