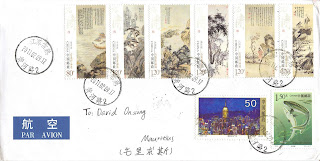 The 6 portrait stamps each show 6 different works of the Chinese landscape painter and poet Shi Tao (石涛).  Shi Tao is one of the most famous individualist painters of the early Qing dynasty. The art he created was revolutionary in its transgressions of the rigidly codified techniques and styles that dictated what was considered beautiful.  Imitation was valued over innovation, and although Shi Tao was clearly influenced by his predecessors, his art breaks with theirs in several new and fascinating ways.
The 1.50元 stamp depicts the Chinese Sturgeon (Acipenser sinensis - 中华鲟) which is thought to have lived at the same time as dinosaurs, dating back to a period 140 million years ago.  Because of that, it is sometimes referred to as a living fossil.  It is alrgely dispersed over the main streams of the Yangtze River and the coastal regions of Qiantang River, Minjiang River and Pearl River.
The last stamp forms part of a set of 4 issued in 1995 on Hong Kong.


Thank you so much Jiayi for your splendid cover and stamps!  :D
Posted by David at 2:42 PM