The MPL issued a set of 4 postage stamps on December 7, 2006 on the theme "Traditional games". 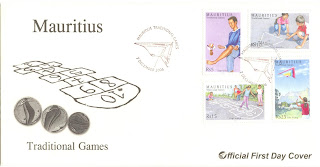 This is an age-old game which originates from China but not well known to the present generation.  The game became extremely popular among boys because of its highly challenging nature.  In fact, juggling the sapsiwaye, which is now made of a bundle of elastic bands tied together in the form of a daisy, with one foot and as many times as possible without letting it fall is quite difficult.
Rs10 - Marbles
The game of marbles dates as far back as the time of Romans.  The ones played with in Mauritius are commonly called as 'canettes' and are mostly made of glass.  The object of the marble game is to roll, throw, drop or knuckle marbles against an opponent's marbles, often to knock them out of a prescribed area and so win them.
Rs15 - Hopscotch
Hopscotch, commonly known as 'La Marelle' in Mauritius, which is in fact its French name, is a wonderful hopping game that can be played on a bare patch of ground or on a floor.  It is  a game based on the idea of not treading on lines.  There are many variations of diagrams but the French and Chinese styles are the 2 commonly used in Mauritius.  Chalk or masking tape is used to draw a hopscotch pattern on the floor and each player has a marker such as stone, beanbag, bottle cap, shell, button and so on.
Rs25 - Kite Flying
Kites are usually made of paper affixed to one or more spar of wood or similar material and are steered using a length of twine attached.  For the Mauritian traditional kites, flat bamboo sticks were used to make the frames and muslin paper to cover them.  For those who could not afford to buy muslin paper, old newspaper was used instead.  They also needed a long tail.
The FDC depicts a hopscotch diagram and marbles.
Posted by David at 2:12 PM