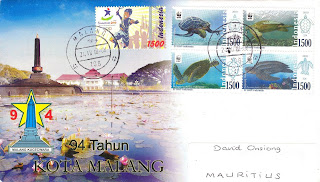 In order to help preserving sea turtles, the POS Indonesia issued a set of 4 postage stamps on November 24th, 2010 depicting 4 different species.
Turtle is a species of ancient heritage. They have been inhabiting the earth from the Triassic age , which was in the range of approximately 220 million years ago. Turtles have managed to survive past the age where dinosaurs did not successfully adapt and survive themselves. Now, the turtle is again experiencing severe challenges in the era of modern humans.
Being home to 6 of 7 species of sea turtles in the world, Indonesia plays an important role in the conservation of this protected species. The number of turtles has drastically reduced, thus threatening the species on the verge of extinction.
The extinction of sea turtles is caused by human activities that are not environmentally friendly such as coastal development destroying the place where turtles lay their eggs, turtles hunting, eggs stealing, accidental capture (by-catch) by shrimp and tuna fishermen and disposal of garbage on the beach and sea.  A very slow turtle reproduction system is  unable to keep up the rate of drastic population decline.
Thank you very much Irene for this lovely cover sent from Malang on the first day of issue! :D  The illustration on the cover is very picturesque... 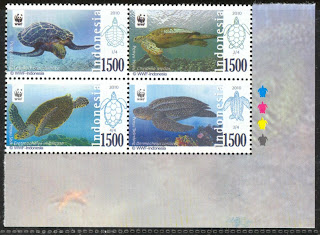