The MPL issued a set of 4 postage stamps on June 5th, 2006 on the theme "Ecology" to mark the Environment Day. 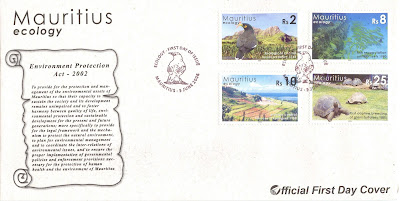 Red locusts (Nomadacris septemfasciata), were periodically destroying food crops on the island.  After an unsuccessful attempt by the French Authorities in 1759, another flock of Indian mynah was released from Mr. Modave's premises in the Plaine Wilhems.  The birds came to be locally known as "Martins" after the Captain of the vessel La Gracieuse which brought the birds from Pondichery.
Rs8 - Fish Repopulation/ Artificial Reefs 1980
Artificial reefs have been created for centuries by fishermen intent on increasing their catch.  The Mauritius Marine Conservation Society, the Mauritian Scuba Diving Association and the National Coast Guard with the help of the Mauritius Marine Authority have created artificial reefs by sinking 14 vessels around Mauritius since 1980, in depth of 12 to 73 metres of water.  Many local fishermen know the location of those artificial reefs and fish on these sites.

During the mid 20th century, in Rodrigues, the Agricultural Department developed the concept of terraced areas, to fight erosion and to make arable land available to a maximum number of families. They were plots of land which were tie-ridged to allow for contour planting of foodcrops and fodder.
Rs25 - First Captive Breeding of Giant Tortoises

The giant tortoises were once present all over the world.  In the mid 19th century, due to inconsiderate killing, only 2 species remained alive, namely the Geochelone gigantea in Aldabra atoll and the other in the Galapagos.  When British scientists learned the atoll was to be commercially exploited, they wrote to the Governor of Mauritius eargerly pressing him to acclimate the tortoises in Mauritius and the Seychelles, as they feared for their future.  The Governor replied favorably and in 1881 the first tortoises were successfully transferred to Pamplemousses Garden and in the Seychelles.  It was the first instance of a successful breeding programme to save an endangered species.  Today the Aldabra tortoise is no longer in danger (150,000 spread all throughout the world) and its native island is part of the world heritage.
The FDC shows the Environment Protection Act - 2002 and the envelope is made of recyclable paper.
Posted by David at 9:26 PM