The Mauritius Post Ltd. released on 30 August 2013 a set of three commemorative stamps on the theme 'Fauna & Flora'. The Rs3 stamp depicts the rarest palm in the world, Hyophorbe amaricaulis, and the Rs10 and Rs18 stamps a species of orchid (Oeoniella polystachys) and one of bird (Phedina borbonica) that can be found in the Bras D'Eau National Park. 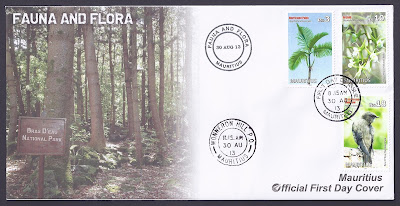 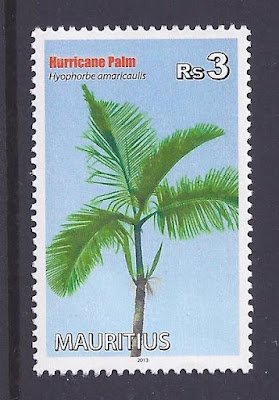 Unique to the island of Mauritius, Hyophorbe amaricaulis, commonly know as Hurricane Palm or the Loneliest Palm is classified as 'Critically Endangered' on the International Union for Conservation of Nature (IUCN) Red List of Threatened Species.

It was first collected by Philibert Commerson around 1770. It is today the rarest palm in the world, known from a single specimen that survived the transformation of a patch of native forest into a botanical garden in Curepipe.

Little hope of discovering other individuals exists as most of the original wet forest habitat of this conspicuous species has been destroyed.

The lonely plant cannot reproduce naturally since it produces female and male flowers at different times. In vitro propagation was tried in Mauritius (late 1990's/ early 2000's), which did not pass the stage of callus.

Attempts in Ireland (1980's) and in England (2008) produced a handful of plantlets, which died after transplantation. Therefore, the only hope to save the species from extinction seems to reside in cloning. 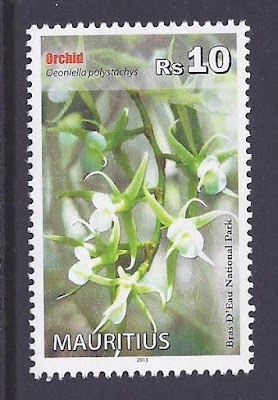 In Mauritius, this species was initially considered to be synonymous with Oeoniella aphrodite, but its inflorescence and flower structure are different from the latter.

Oeoniella polystachys is endemic to the south western Indian Ocean islands of Mauritius, Réunion, Madagascar, Comoros and Seychelles, bearing white flowers of about 2-3 cm across, blooming for about a month from late July to late November.

It is a common species in Madagascar, occurring mostly on the east coast. In Réunion, it is found in the northern dry forests, where its population is declining.

In Mauritius, the best population is found on Ile aux Aigrettes, and in Bras D'eau.  Scattered plants exist at Mountain Chat, La Nicolière and Bambous Mountain Range and Ferney (between Mountain Camizard to Mountain Lion) 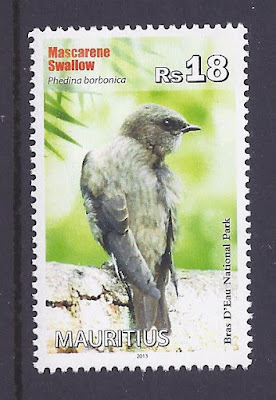 The Mascarene Swallow, also known as the Mascarene Martin and the 'grosse hirondelle' in French, is a rare bird with a total population of less than 500 pairs in Mauritius.

The Mascarene Swallow nests singly or in small loose colonies of up to 20 nests in cavities which provide a flat ledge, or behind a tuft of vegetation.

The upper parts are earth-brown; under parts are much paler, with dark streaks. It is commonly confused with the Mascarene Cave Swiftlet (Aerodramus francicus) which is smaller, has longer and narrower wings, is blackish-brown rather than earth-brown upper parts and has a paler rump-patch.

In Mauritius, the Mascarene Swallow is found from sea level to the highest point, but is unevenly distributed with known colonies in the the west and south, and is occasionally recorded in the east of the island. The bird feeds over built-up areas, lakes, reservoirs, around cliffs, filao (Casuarina species) belts, and shorelines.

It is often seen perching on electric wires, trees, ground or shoreline sand and rocks.

The Mascarene Swallow catches insects such as beetles, bugs, flies, wasps and ants in flight.

Nests may be built on sheltered ledges of buildings and bridges, or in cliffs, caves or banks, often above water, and has been recorded breeding on boats moored in the Black River Bay.

The nest is an open platform or saucer resting on a flat base, and is made out of plant fibres such as Casuarina needles, rough grass, small twigs, dead steams or algae, lined with feathers or fine plant material. Two white and lightly spotted brown eggs are laid between September and December.

The Mascarene Swallow population might be increasing, but it is still considered rare.

It is of an area of 497.2 ha and is mainly under Mahogany, Araucaria, Tecoma and Eucalyptus plantations. It also harbours patches of native vegetation.

It is one of the last remnants of the coastal lowland dry dwarf forest. It is the habitat for 10 species of butterfly and is well-known for its population of birds.