2015 marks 50 years since Singapore became independent. After 'Our Journey Together' in 2013 and 'I am Singaporean' in 2014, Singapore Post released on 5 August 2015 another set of stamps titled 'A Brighter Future Together' to celebrate the country's golden jubilee. 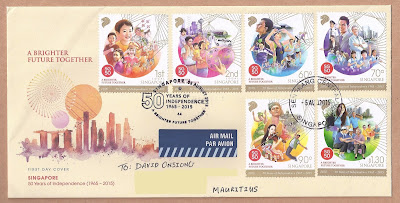 The stamps convey the following messages:

Thank you very much Terence for these really nice FDCs sent from Sengkang Central Post Office on the first day of issue. 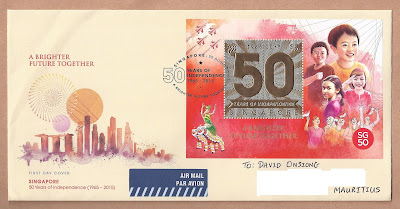 Terence also sent me these cinderella stamps. Cinderella stamps are "virtually anything resembling a postage stamp, but not issued for postal purposes by a government postal administration." (Wikipedia: https://en.wikipedia.org/wiki/Cinderella_stamp)

The World Stamp Exhibition was held in Singapore from 14-19 August 2015 and joint issues scheduled in the context of these golden jubilee celebrations.