The Mauritius released on 9 October 2013 a Special Commemorative Cover to mark the 10th anniversary of the privatisation of postal services in Mauritius. 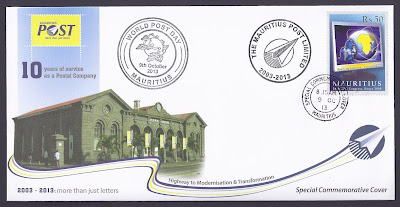 The reforms of the postal sector in the early 21st century as part of the government initiative, aimed at increasing efficiency and competitiveness to face the challenges in the sectors concerned, especially the postal service with the electronic substitutions and liberalisation concept gaining ground.

This has lead to the creation of the Mauritius Post Ltd., a private company incorporated on 11 October 2001 with the Government as the majority shareholder. However actual operations started in 2003. Appropriate legislations were enacted, the main ones being the Postal Services Act 2002 and the Post Office Transfer of Undertaking Act 2002. 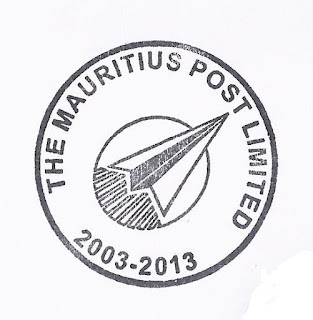 The mission of the Mauritius Post was identical to that of its predecessor, the Mauritius Postal Services, and was "to provide access to an array of services across the country including postal, electronic, financial and government-related services through a wide network of branches".

The global trend of dwindling mail volumes due to the increasing use of electronic means of communication triggered the rethinking of the way postal services were delivered.

One of the main outcomes of this rethinking was the diversification into the provision of non-postal services.

After some three and a half tough years at the start, the Mauritius Post was turned around and became viable (applicable as at October 2013).