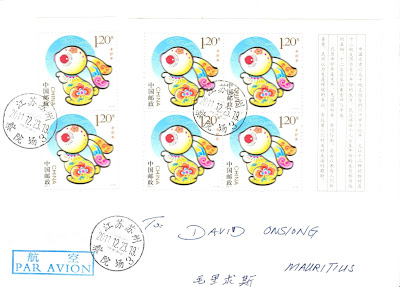 The hare is the fourth animal in the 12-year cycle of the Chinese zodiac.  Year of the Hare (辛卯年) 2011 ranged between 3 February 2011 and 22 January 2012.  The rabbit is well-known for attracting good fortune and being lucky.  Another aspect of this Chinese Horoscope sign reveals tendency to cultural activities and the arts.  Most Rabbit people are friendly individuals who enjoy the company of a group of good friends.
China Post issued, as it does every year for each Chinese New Year, a  single stamp, on January 5, 2011, to commemorate this major event in China and among the Chinese diaspora around the world.  A block of four and a strip of two of this 2011 'Year of the Hare' stamp are present on the above mail sent from Suzhou.
The next Year of the Hare will be from 22 January 2023 till 9 February 2024.
Thank you very much Xu. :)
Mailing date: 23 DEC 2011
Delivery date: 31 DEC 2011
Posted by David at 5:32 PM