The Four Heavenly Kings in Malaysia 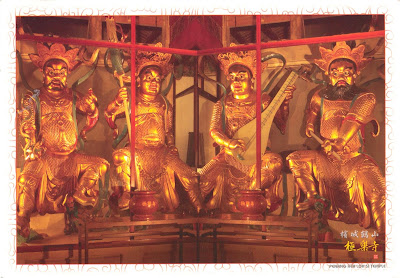 The four Heavenly Kings are four Buddhist gods, each of whom watches over one cardinal direction of the world.  From left to right: Kuang Mu, To Wen, Ch'i Kuo and Ch'ng Chang.
The statues on the above postcard are found at the Kek Lok Si Temple, or the Temple of Supreme Bliss, in Air Itam, Penang Island, northwest Malaysia.  Opened in 1891, it is the largest Buddhist temple in Southeast Asia 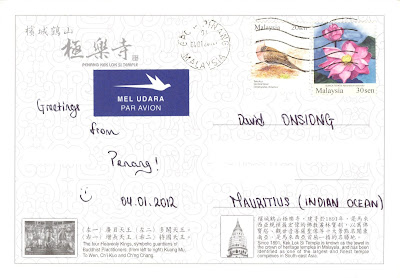 The stamps illustrate the Spotted Dove or Tekukur (Streptopelia chinensis - 20sen) and the Lotus or Bunga Teratai (Nelumbium nelumbo - 30sen), from the 2005 'Birds' and the 2010 'Garden Flowers' definitive sets respectively.  The 20sen Spotted Dove stamp has been reprinted so many times that I don't think this one is from the original issue... well, I'm pretty sure of it.