Marine Life and Christmas from the Philippines 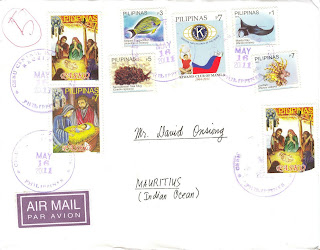 Here's another cover from the Philippines with marine life definitive stamps affixed on it.  The P1, P3, P5 and P7 stamps illustrate the Manta Ray (Manta birostris), the Striped Surgeonfish (Acanthurus lineatus), the Sacoglossan Sea Slug (Cyerce nigricans) and the Lionfish (Pterois volitans) respectively.
The three P7 stamps, on the left and on the right of the envelope,  are on Christmas (Pasko in Filipino).  The first one depicts the Magi, also referred to as the (Three) Wise Men who were a group of distinguished foreigners who are said to have visited Jesus after his birth, bearing gifts of gold, frankincense and myrrh.  Teh second stamp represents the commonest scene of the Nativity: newly-born Jesus surrounded by Virgin mary and Joseph.

Kiwanis International is an international, coeducational service club founded in 1915 and having a current membership of 240 000 members (known as Kiwanians) in 7700 clubs in 80 nations.  The name "Kiwanis" was coined from an Otchipew American Indian expression, "Nunc Kee-wanis," which was originally translated as "We Build" which became the original motto of Kiwanis.  The current motto is "Serving the children of the world".  PhilPost issued this P7 in 2011 in honour of the Kiwanis Club of Manila. Thank you very much Ralph! -_-
Posted by David at 2:58 PM

Email ThisBlogThis!Share to TwitterShare to FacebookShare to Pinterest
Labels: Philippines