History of Locomotives from Austria 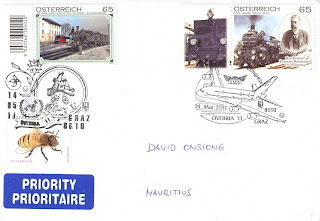 Karl Gölsdorf (1861-1916) was an Austrian engineer and locomotive designer.  He invented numerous team locomotives, among which his Class 310 locomotive of 1911, a six-coupled express locomotive with a four-cylinder, superheated compound engine, which was one of the most elegant of its day and, since the reactivation of no 310.23 in 1986, currently the most well-known product of the Austrian design engineer.  Österreichische Post issued the stamp on the far right of this cover to commemorate the centenary of Gölsdorf's Class 310.
In 1885, was created the frontier railway. The € 0.65 stamp,  issued in 2010, has an impressive way to mark its 125 years.  Designed by Ernst Sladek, it shows both a historic steam locomotive of the past and a modern trains powered by today and reflects the history and development of the South Styrian frontier, southeast Austria, railway in an original visual language.
Thank you Florian!  :)
Posted by David at 2:59 PM

Email ThisBlogThis!Share to TwitterShare to FacebookShare to Pinterest
Labels: Austria