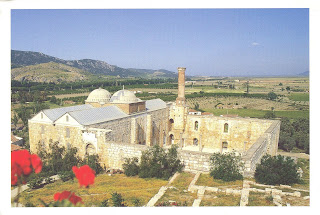 The Isabey Mosque (İsabey Camii in Turkish) was built in 1734-1735, by the architect Şamlı Dımışklıoğlu Ali, and is one of the oldest and most impressive works of architectural art remaining from the Anatolian beyliks, small Turkish Muslim emirates or principalities set up at the end of the 11th century and during the second half of the 13th century. 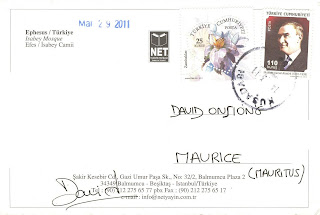 Thank you very much David for this souvenir from Turkey. :) The 110 kuruş stamp pictures the first President of Turkey, Mustafa Kemal Atatürk (1881-1938) and the 25 kuruş one features the lily (Zambaklar in Turkish).
Posted by David at 1:50 PM

Email ThisBlogThis!Share to TwitterShare to FacebookShare to Pinterest
Labels: Turkey