The Mauritius Postal Services released on 13 June 2001 a set of four stamps to mark the bicentenary of the Baudin Expedition.

In 1800, Napoleon Bonaparte, then First Consul, commissioned Post-Captain Nicolas Baudin to explore the South-West, West and Northern coastline of New Holland, later to be known as Australia. As the observations were to be conducted in the fields of geography and natural history, the leading ship was named Géographe, its consort vessel under the Commander Emmanuel Hamelin, Naturaliste. A third vessel, the Casuarina was later purchased at Port Jackson. 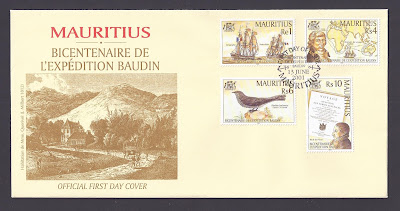 The Institut National had recommended the appointment of a number of scientists, including botanists and zoologists, and some artists, Jacques Gérard Gilbert joining as chief draughtsman.

The expedition sailed on October 19, 1800 from the French port of Le Havre and reached Isle de France (Mauritius) on March 16, 1801. When it sailed again on April 25, a number of scientists and artists including Milbert and Garnier declined to continue on the journey on the grounds of illness. Baudin then appointed Charles-Alexandre Lesueur and Nicolas-Martin Petit to replace the defecting artists.

Hamelin called again briefly at Isle de France in February 1803 carrying back to France the live animals and part of the collections. Baudin, gravely ill, returned from the uncompleted exploration of the northern coastline of New Holland in August. He brought back an exceptional collection of zoological, botanical and anthropological specimens, enhanced by the excellent illustrations of the artists. On Baudin's death in September, Commander Pierre Bernard Milius was appointed to take the expedition back to France. The time spent on the island by the scientists and artists yielded interesting information on its topography, fauna, especially the marine fauna and flora. The Géographe left Isle de France on December 16, 1803 and reached Lorient on March 24, 1804.

Re1 - Géographe and Naturaliste 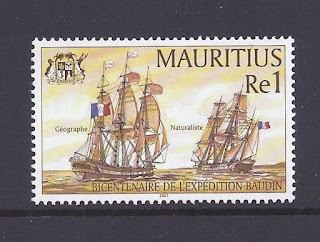 The stamp portrays the two ships on the high seas.

Rs4 - Itinerary of the Voyage 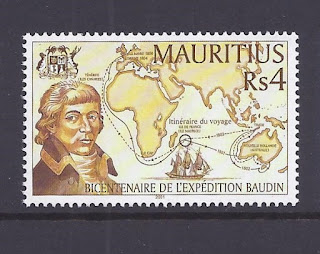 The stamp depicts the route taken by the ships on both the inward and outward journeys and the portrait of Baudin. Nicolas Thomas Baudin was born in Ile de Ré, France on February 17, 1754 and died of tuberculosis in Port Louis, Isle de France on September 16, 1803. 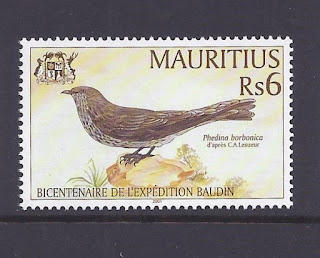 The stamps features the picture of an indigenous bird of Mauritius, the Phedina borbonica brought back by the expedition. It was painted by Charles-Alexandre Lesueur, born at Le Havre, in 1778 and deceased at Sainte-Adresse on December 12, 1846. He had been promoted draughtsman on the defection of Milbert. 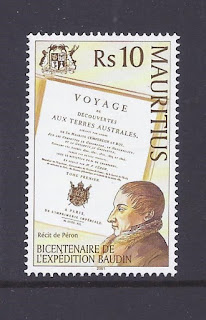 François Péron who had joined the expedition as trainee zoologist, was born in Cérilly on August 22, 1775 and died there on December 14, 1810. He had during the journey the opportunity to become the main zoologist of the expedition and to observe natural main in his environment, thereby able to contribute the early writings in anthropology. He was instructed by the government to write the historical part of the Voyage. The first volume of the Historique du Voyage de découvertes aux Terres australes appeared in 1807. The stamp shows the title page and the portrait of Péron.

The FDC features an engraving by J. Milbert showing the estate of Madame Querivel where Baudin died.

Email ThisBlogThis!Share to TwitterShare to FacebookShare to Pinterest
Labels: Mauritius 2001