Happy Year of the Dragon!

I wish you all a very joyful and prosperous Year of the Dragon! :)
In traditional Chinese culture, the Dragon is an auspicious, mythical creature incarnated as an emperor, representing supreme power and commanding great respect.  It is believed that people born in the Year of the Dragon are confident, courageous and clever.


I seize this occasion to present the Year of the Dragon covers I received: 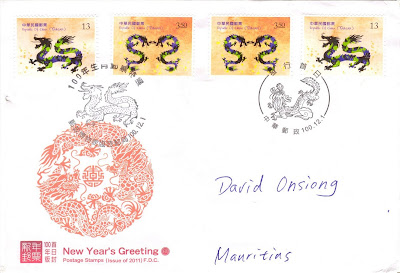 Chunghwa Post issued on December 1, 2011 (year 100) a set of 2 stamps and a souvenir sheet to commemorate the Lunar New Year.  Thank you James for the interesting FDC above. (=
The NT$3.50 stamp represents a pair of dragons staring into each other’s eyes, thus conveying the idea of “belonging to each other” and symbolizing that “all one’s wishes will come true.”
In the NT$13.00 stamp, the image of this dragon holding its head up high and ready to spring into action represents “pride” and symbolizes “joy and good health.” 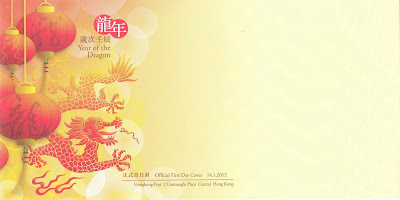 Finally we have this nice FDC which I bought on January 9, 2012 in Hong Kong.  Unfortunately the stamps were to be released only on January 14...  so couldn't affix them on the cover.